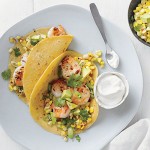 This evening, my husband, son and I made the most awesome, fresh-tasting summer meal. And let me say right now that, being a South Texas girl with a Mama who cooks better than most professional chefs, I rarely rave about a taco recipe because who could ever improve on hers?

Well, this one comes close. We adapted from a Cooking Light recipe and made it our own. (The magazine called this “Mexican food,” by the way, and it’s not. It’s more California Meets Texas food.) Regardless, I highly recommend. And the greatest part is that it had plenty of smaller jobs that our son could handle. He was very proud of his lime-sour cream sauce.

Try it while the summer corn is still in season!

3 ears of fresh sweet corn, cut off the cob

Mix corn with 1 tsp. of olive oil, spread in a roasting pan. Broil on high about 8 minutes until corn is lightly browned. Let corn cool.

Combine corn, avocado, cilantro, green onions, salt, 1/4 tsp. of black pepper, and juice of half a lime. Mix carefully so it doesn’t turn to mush!

Combine 2 tsp. of lime juice with sour cream to make the lime-sour cream sauce. Mix thoroughly. Kiddo says for about 15 minutes. “That’s how I got it perfect,” he says. Mom says 30 seconds at most. 🙂

Toss shrimp into sauté pan with remaining olive oil and add spices and the remaining juice in the lime. If the shrimp is making a ton of liquid as it cooks, pour off a good deal of the liquid as you cook. Cook the shrimp, stirring/tossing, for about 6 minutes or so – or until done.

Meanwhile, fry the corn tortillas in the canola oil until they are just beginning to get crunchy – you want them soft enough to bend easily still.

Top each warm tortilla with the corn-avocado mixture and a drizzle of the lime-sour cream sauce.

Enjoy with a light ale or ice-cold Dr Pepper, of course.

4 thoughts on “You Must Try This Recipe: Shrimp Tacos With Corn-Avocado Salsa”