Following is an essay I wrote a few years back that was eventually published in the Chicken Soup for the Soul series. A version of it also placed in a Real Simple magazine essay contest. I’m pleased to share a shortened version of it here for my blog readers.

The Magic of Second Chances

Years of disappointing infertility treatments can leave you feeling raw inside — like an asphalt-skinned knee or that tender place beneath an ugly blister when you peel the outer layer away. It was the kind of open wound that drove me to crazy acts, like directing daggered looks at women shopping for baby wipes and absurdly mean, fortunately silent, comments toward unsuspecting pregnant women at the mall.

What got me through those ugly days, and what served as a bandage over that intense rawness, was this: There remained a tiny degree of hope that the next month could be different — that this time, the moon and the stars and my body would all magically align to give me what I wanted most in the world, a baby.

But unfortunately, celestial magic, and pregnancy, continued to elude me. Procedures weren’t working. Finally, our doctor called one day in the spring to say she recommended no further treatments, no further procedures. Statistically, I had a much better chance of winning the lottery — twice — than giving birth.

That evening, with my husband out of town, I curled up on the couch with our collie at the time, George Bailey. He rested his long, Lassie-nose on my leg. He’d already secretly enjoyed the pint of butter pecan ice cream I’d opened but couldn’t eat. And now he looked concerned about the growing pile of used tissues at our feet.

I rehashed the conversation with the doctor in my head, searching for something, anything, that might offer a hint of optimism. But there was nothing I could hold on to this time. And her last words tumbled through my thoughts again and again. “Honestly, if I were you, I’d consider adoption.”

Adopting a child? It wasn’t that we didn’t think it was a good idea. We thought it was great — for other people. I think in some ways, saying “adoption” out loud would’ve meant some kind of defeat to us — an acknowledgement that perhaps we might not, in the end, conceive. And that wasn’t something we could let ourselves believe.

I looked down at George Bailey, our formerly abused, now reformed, sweet loyal canine companion. I wanted to make sure he hadn’t changed before my eyes, too. I ran my fingers through his soft, thick fur. I had to smile. George Bailey had served as a pillow, sounding board and heating pad in recent months. Now his tawny-tan coat was absorbing my tears.

We had adopted George from a rescue group two years before, his beat-up body complete with two broken legs. We’d brought him home around the holidays; the group had named him after the movie, It’s a Wonderful Life. Both Jimmy Stewart’s character and our George Bailey had been given a second chance at life.

George Bailey’s dark, almond eyes stared up at me as I stroked his ears. Adoption in his case had been an easy decision. We met him online and immediately wanted to give this bruised soul a happy, comfortable home. For George Bailey, though, becoming a part of our lives had been a leap of faith. Those almond eyes didn’t always reflect love and trust.

In the beginning, he was guarded. He literally did not make a sound for months. Finally, after a great deal of coaxing (not to mention treats) on our part, he decided to give us a chance. I imagine he had to overcome many doubts — and a lot of bad memories — to make that jump.

I stayed up all night long, George Bailey sleeping at my feet, a crackling fire toasting the cabin and tossing shadows on the walls. I researched international and domestic adoption. I read blogs; I read adoptive child psychology reports. I read about state and federal laws, about laws in countries I had only previously thought of when reading ethnic restaurant menus.

That night of research set us on a journey that transformed our lives. Within a few months, we had settled on domestic adoption, worked on how we would fund the $30,000 bill. Within a few more months, we had completed our paperwork and passed our physicals and background checks. (Luckily, my pregnant-women-hating behavior never got out.)

By August, we were matched with a birthmother and birthfather who chose us to be the parents of their unborn child.

In early fall, we held our son when he was minutes old. We cried with the birthparents, for our shared happiness, for their loss. We told the birthparents we loved them. We meant it.

When we brought home our baby and introduced him to George Bailey, our collie seemed … proud of us.

Magic, it’s safe to say, no longer eludes us. Every day is filled with wild little-boy laughter and Dennis-the-Menace level schemes.

And we owe it all to my sweet and gentle George Bailey, who taught me how to put the hurt and doubt behind me — and leap. 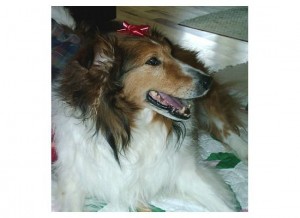 3 thoughts on “The Magic of Second Chances”