My rough-around-the-edges, Texas-rancher dad spent 25 years or so in a house with four females (and one bathroom for most of that time), and I never once heard him complain.

As he said to me when I recently asked him what the secret was to being married to my mom for 50 years, this is his philosophy: “I try to keep my head down and my mouth shut.”

Did I mention he’s fairly funny, too?

My dad with child-labor ranch-hand.

He probably learned that mantra in the Army, but hey, it’s not a bad plan. It’s also one that failed to sink in with his middle daughter. But ironically, I think I actually owe a good part of my outspoken nature to my dad.

You see, he may look to the world like a Tony Lama-boots- and Stetson hat-wearing good-old-boy from Waelder, Texas. But my dad is a highly intelligent man who, in partnership with my mom, gave us all an extraordinary gift: He made his daughters wholeheartedly believe that we could be anything we wanted to be, that we could do anything we set our minds to. As long as we worked hard and used our brains (that he helped cultivate, I might add), the world was ours to conquer.

In fact, I didn’t even really believe that sexism existed out there in the world — that girls were sometimes treated differently, as somehow less — until I got to college. You can imagine my anger and downright shock when I encountered blatant discrimination from a professor at Texas A&M. It was only then that I realized being a girl meant I’d need to work even harder to get to where I wanted to go.

But that was okay, too. Because my dad also taught me that no matter what life throws at you, you work through it. No matter how much something hurts, you find your grit and get up again the next morning.

Here’s a prime example of the kind of father my dad was when we were growing up. I decided on a whim one day, at age 17, that I wanted to work at the local radio station as a DJ. I had no experience, of course, or any idea of what the job entailed. But why would that have stopped me?

I didn’t ask my parents about the idea; I just headed down to the station and pitched myself to the owner, who just happened to need someone for the late-night shift — as in signing-off-at-midnight-with-the-national-anthem night shift. Neither of my parents blinked an eye when I told them about my new gig, and I started the following week.

I had my own wheels by then, so I didn’t need a ride to and from the station. And yet, every night, once I’d signed off the air, as I’d lock up the station alone and walk out to my car, I’d see my dad parked a few yards away in his old Chevy, just waiting. Maybe listening to some Waylon Jennings or CW McCall, or reading a Larry McMurty novel by the humming street light. Night dew already on the windshield, crickets chirping all around. I’d smile at him, give him a little wave, and then he’d follow me home.

He never once said I couldn’t do that job because it was dangerous, leaving the station so late, by myself, when everyone in the two-county broadcast area knew exactly where I was and when I’d be heading home. He never suggested I do something a little more ordinary, like a normal junior in high school might do.

He never said a word.

He was just there. Making sure I was okay. Even though it meant he had to stay up late, too.

He was just, always, there.

I knew he had my back, even though he’d raised me to be fearless. 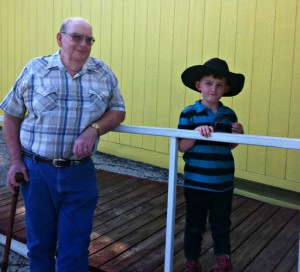 Now, when I think about how I’m raising my own son, I’m using that as my guide. Be fearless, kid. Grab your crazy idea and go for it. But I’m here. I’m always here. Just in case.

My dad may not be a man of many words, unless he’s telling old Army stories, but he certainly knows how to raise little girls to be headstrong, independent women who rarely take no for an answer.

Thank you, Daddy. (Yes, we all still call him that. We were raised in Texas, remember.)

Thank you for being our head-down, mouth-shut, loving hero who inspired us to be who we are today.

I kind of think that, even now, in your seventies, you’re still the glue that holds us all together.

13 thoughts on “The Best Gift My Dad Gave Me”