Due to limited funds (I need a KickStarter campaign for my life), our family’s summer vacation this year needed to coincide with buying three plane tickets home to Texas to celebrate my parents’ 50th wedding anniversary.

We talked it over with great seriousness. I suggested a cabin on one of the lakes around Austin, or the San Antonio Riverwalk after the big party in my hometown. My husband suggested anywhere there was air-conditioning and tequila. Our son, however, was all about a beach.

We’d taken an awesome trip to Florida when he was not even 2 years old, and he’s seen those pictures time and again. But he can’t remember ever being near the ocean. And the kid wants to be a marine biologist (this moon cycle at least).

So, being the Perfect Mom that I am (ha), we decided to book a place somewhere along the Gulf Coast that was not more than a few hours from my parents’ celebration. 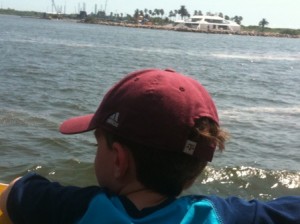 Heading out on the ferry from Galveston.

An Internet search led me to research Crystal Beach on the Bolivar Peninsula. It’s an island accessible only by ferry from Galveston. I’d spent a good deal of time in Galveston back in the day but had never been to the peninsula. Even if I had, I probably wouldn’t have recognized it now: It seems Hurricane Ike pretty much wiped out the island five years ago. And when I say wiped out, I mean, WIPED OUT. (You can see pics here of the catastrophic damage.) But the area was rebuilding, and I liked the idea of supporting that. And because there aren’t many services/amenities there yet, prices were reasonable, and I found a cute little beachfront house for less than we’d pay for a condo in Galveston or Port Aransas. So I booked it.

My husband was not all that excited about this excursion. You see, as an Air Force brat, he grew up with the perfect sand beaches and clear blue waters of Hawaii and Florida. He hadn’t heard great things about the Texas Gulf of Mexico. (I didn’t even tell him that the area was known for shark breeding …no sense adding that to his list of why-we-should-not-gos.) 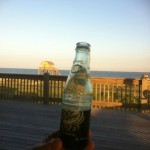 View from our deck of an ice-cold Dr Pepper. Oh, and the ocean.

But I convinced him, and we packed up a boogie board, summer sausage (see my post about that here), Throwback Dr Pepper in bottles, and a large amount of limes and tequila and headed to Crystal Beach.

My report? It was really just lovely. The water isn’t Caribbean-blue, for sure, and depending on how much churn was going on, it could look like chocolate milk, but it was warm ocean bath water with perfect-sized waves for family fun. 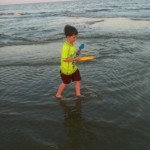 The beach was not white, but it was fairly void of beer cans and jellyfish and pretty great for castle-building. There was, as predicted by others, lots of seaweed, which some people see as an eyesore. But my son found its abundance great for catching ghost shrimp by shaking clumps of it into his fishing net.

The temperature was perfect for June, mosquitoes weren’t biting, and with the Gulf breeze, sitting on the deck at night, listening to good music, was the epitome of relaxation.

Unlike Port A and parts of Galveston, the beach was not crowded, and there were no drunken parties and wet t-shirt contests going on around us.

But here’s what I loved about Crystal Beach the most: Over the course of a few days, our son found a family of three sweet little boys to play with, and we parents got to hang out with the parents and grandparents. The family was from East Texas, and they welcomed us into their little part of the beach with open arms. I watched as my son, an only child, played in the waves and fished for minnows and crabs and dug in the sand and flew his kite with his new friends. I watched his smile light up in ways that it simply can’t when he plays with his parents (even though we’re pretty darn fun, if I should say so myself.) 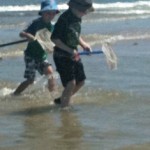 Meanwhile, I laughed and soaked up the humor and kindness and thick Texas accents of our new friends, one of whom reminded me so much of my grandmother, I had to fight back tears a few times.

I listened to the stories they told — stories, I’ve found, that you just can’t get anywhere but Texas — drinking stories, fishing stories, kid-gone-wrong stories, small-town stories, trailer-trash stories, oil-rig stories, down-on-your-luck-four-wheel-drive stories, and stories about how family sticks together no matter what … and how when it comes down to it, home is what keeps you grounded.

Even when a hurricane takes everything but your foundation away. 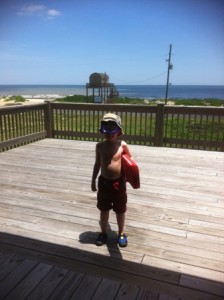