but keep in mind

that must hold it

Photo by Nitish Kadam on Unsplash

This is my new best friend, the portable swamp cooler I call, “Al.”

I haven’t been updating this blog as much as I’d like (and not near as much as my publisher would like I’m sure!) Life has been exceptionally crazy of late, though, so I have a good excuse. Let’s see … we moved from the mountaintop to the foothills of Denver, and I’m slowly emerging from grief mode. I have purchased a portable swamp cooler and drag it around me like some folks drag around their oxygen tanks. I also left the job I’ve been at for six years (the longest time I’ve ever been in one job) and started a new job that I’m loving. My son started first grade at a new school, and my husband lost his job. Yeehaw! But things are settling down now. Or will soon.

So until I have the ability to write more than a paragraph, I thought I’d go through some of my old stuff and post a short piece of my previous work.

Following is one of my favorite little mini-essays that I wrote about my childhood, growing up on the banks of the Guadalupe River. Much of my third novel I’m working on right now takes place along the river. Thanks for reading! (And my apologies if you’ve read this before.) 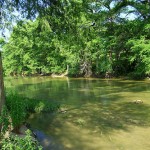 The South Texas Guadalupe River in all its muddy loveliness.

Patterns exist in every childhood. Eating warm oatmeal for breakfast. Going to church at 9 a.m. on Sundays. Catching the bus after school.

Well, I rarely ate anything as healthy as oatmeal, only went to church on Easter and Christmas, and rode the bus just once, to see where it went. But the one pattern that stands out most in my years of growing up in South Texas is this: for about 10 years, every other Sunday, my two sisters and I piled into the back of my father’s 1979 green Ford truck with the camper on the back, sat on cattle feed sacks so hard we could feel every cube inside, and sang Tammy Wynette songs until my parents had driven the 20 or so miles to our bi-weekly destination.

My parents owned a camphouse on the banks of the Guadalupe River in South Texas. The cabin sat high on a grassy hill, just a stone’s throw from the river, and looked like it was put together with wood glue and a roll of aluminum foil.

Early on, my father had tiled the concrete floors with free, leftover linoleum squares from the lumberyard, so each one was a different pattern. Rusting iron beds lined the front room like an army’s hospital ward, the mattresses thin as slices of Wonder bread and holding fast to the mildew that only river air can provide. The bathroom’s toilet and sink showed only hints of ever being white; the well water’s sulfur had painted them brown and yellow and red, making them look like something fit for a horror movie. The kitchen was an old school bus, attached to the back of the camphouse by a welder’s hand. The kitchen-bus ran the length of the back of the house, the floors slanted down so much you could lose your balance bending down to pick up a dropped potato chip.

Our first chores when we arrived on Sunday mornings were the following: open the wood shutters that covered the screened windows in the front and back, securing them with baling wire. Check the bathroom and kitchen for water moccasins. Help Mom unload the brown grocery bags and stay out of Daddy’s way as he lit the barbecue pit.

After that, we were free.

Unlike at home, where my mother kept a tight handle on cleanliness, we could come and go as we pleased, river mud and all.

We could eat greasy burgers on buttery Texas Toast.

When a rain shower would develop, we could spend time inside, jumping from one iron bed to the next—a highly developed form of chase.

We could play on the tires that hung from century-old pecan trees as swings, and land on our knees, not worrying a bit about the grass stains.

We could build mud castles next to the swift currents of the Guadalupe and walk around all day with streaks of dried, clay-like dirt on our feet, arms and legs. 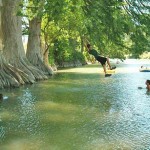 My sisters and cousins and I swang on a rope swing like this one out into the river. I wish I had photos of ours, though, because it was way better.

We could dangle from a thick, rough rope tied to a sturdy oak branch and let ourselves fly like birds out over the river, then fall from the sky with our stomachs in our throats, into the deep water, then float on our backs, feet first, down to the boat dock.

And we could run back to the camphouse, hair dripping wet, swimsuits filled with river silt, and walk straight into the kitchen to grab a cold Dr. Pepper, leaving footprints while hopping from a green paisley tile to one with sunbursts of orange.

Something about those days on the river has stayed with me through the years, as have the raised white scars on my knees—from landing on rocks in the river or cracked pecan shells near the tire swing.

I was at my best then, I think, when there were few rules and even fewer moments of doubt. I, along with my sisters, didn’t just live out the hours on those Sundays, we attacked them, like something fleeting. Like chasing dragonflies in waist-high weeds.

Risks seemed inevitable, even expected. We were wild. We were tomboys. We were fearless. We were laughter and dirty cheeks and sunburned noses.

We were our truest selves.