I’m cheating a little tonight. I was going to write a quick blog post before hitting the hay, but then I realized I had recently answered an Author Q/A for a blog during my two-week blog tour, but the content was never used.

So I think I’ll publish it here, just for kicks. The really cool thing? It includes a quick teaser of content from my second novel, A Good Kind of Knowing, which will be out this summer. I hope you enjoy it. But first, the Q/A.

Q: What inspired you to write this book, Blue Straggler?

I had written a short story with three of the characters that now appear in Blue Straggler (Bailey, Rudy and Idamarie), and I just loved them so much that I needed to put them into a broader story. Plus, the main character in the short story (Bailey) was going through a kind of early mid-life crisis, and I knew a lot of friends who were going through similar things, as was I. I thought the story could be universal and really explore what it means to find out who you are and where you’re meant to land in life.

Q: Do you have a favorite place you like to write? 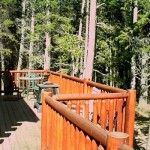 Our deck in the summer = paradise for me.

Yes! On my deck in the spring, summer and fall. I live in a log cabin in a beautiful area in the Colorado mountains, in the middle of a national forest. It’s so peaceful; I can’t think of a better place to settle in and crank out stories. When winter rolls around, and the deck is not an option due to 20-below temperatures and snow, I write in my back bedroom or in the great room, next to a warm, crackling fire. Thank goodness for laptops (and golden retrievers to keep my feet warm)! We’re talking of moving to a lower elevation soon; it’ll be interesting to see how it affects my writing.

Q: Do you have a favorite author of your own?

So many. I love Barbara Kingsolver. She’s probably at the top of my list. Anna Quindlen would be there, too. (Her new memoir is brilliant.) Anne Lamott and Lorrie Moore. Larry McMurtry. Cormac McCarthy. Toni Morrison. I just can’t choose; it’s like asking me which of my many furry babies (dogs) I’ve had through the years I like best.

Q: A favorite character? One of yours or someone else’s that touched your heart?

A: Not to toot my own horn, but in my Blue Straggler, I love, love Idamarie. She’s just so down-to-earth and real and colorful and she always shoots from the hip. She’s the kind of Texan I miss most, living in Colorado like I do now. If I could have an Idamarie in my life, I think life would be even more fun than it is now. And I’d likely be more grounded with her sage advice around.

Q: Are you currently working on anything? If so, can you give us a tease?

I am putting the finishing touches on my next novel, A Good Kind of Knowing. It’s set in a small, rural town in Texas, and explores how all of these small-town lives are interconnected, and how even though we all come from different places in our lives, we have a lot in common — big things like humanity and small things like a love of good music.

So, I’ll leave you with a super tease! This is the most I think I’ve revealed of any part of the book. As you’ll see right away, A Good Kind of Knowing is a different kind of novel than Blue Straggler. It’s not comic fiction, though there is some humor. 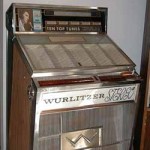 This is the kind of jukebox mentioned in the excerpt below.

This is an excerpt from about halfway through the story. Sera is the main character in the novel; she owns a local music store. She’s married to Bill, but has a “special” relationship, which is growing in intimacy and closeness, to a handsome young musician (Mack). She’s been pretty sick for a while, and most people in town know it. Some of her friends have been trying to help out at her business while she deals with her illness.

Mack waited for her at Antonio’s bar. Antonio stood over by the pool tables, emptying ashtrays from the night before. The afternoon sun filtered in through the small windows up front, sending sleek slats of light into the otherwise dark room and catching the perpetual dust of the place in a kind of suspension around the room. Two men, both in their eighties, sat at a square table in the corner, smoking thick cigars and playing cards. Every now and then, one of them would chuckle and cough. Antonio had turned on the jukebox—an old Wurlitzer with just one remaining front bulb flickering—and pushed the numbers for his favorites, mostly Freddy Fender hits.

Antonio mumbled the words to “Vaya Con Dios” as he picked up the previous night’s litter around the booths in the back. Empty beer bottles knocked together in his hand.

Mack sat at the bar, his felt hat on the barstool beside him, his hands working to fold a square bar napkin into the shape of a flimsy paper airplane. He shifted his weight on the barstool, glanced back at Antonio, then shifted again. “Sure I can’t help you back there?” It was the third time he’d asked.

Antonio hollered his response. Same as before.

The front door squeaked a little, drowning out the low-playing music for a second, and Sera stepped into the bar, jeans hanging loose on her hips and one of Bill’s sweatshirts tied around her waist. A blast of fall slipped in behind her and the wind sucked the heavy door back hard as she came in.

“Hey there. Been waiting long?” She greeted Mack with a quick kiss on the cheek. He wondered if she’d meant to let her lips linger, or if it was only in his mind.

“Thanks for meeting me, hon. I needed to get out of the house for a while.” Sera waved to Antonio as she talked. “I don’t know how long I can stay, though. I never know when my body’s going to give up the ship for the day.”

“I was glad you called,” Mack replied, nodding again at Antonio as he motioned for them to help themselves to the cold longnecks chilling in a long, aluminum tub next to the bar.

Mack picked out a couple and used the corner of his brown work jacket to twist off the caps.

“Can you even have beer?” Mack hadn’t thought to ask before he handed it to her.

“Oh hell yes. Why not? Not like a little beer every now and then ever killed a person.” She laughed at her joke and nudged Mack’s shoulder.

Antonio walked over to them and put his hands on Sera’s neck.

“How’s my favorite lady today?” Antonio asked, squeezing her thin shoulders. Mack straightened next to her.

Sera smiled and swirled around on her barstool to face Antonio. “Tony. Join us? I’m taking a walk on the wild side, going to see how hops and barley affect pancreatic distress.”

Antonio glanced at Mack, then back at Sera. “Maybe later, okay?”

As Antonio left to check on his two customers, Sera turned back to Mack and asked how things were at the store.

“Nobody’ll tell me a thing, Mack. Bill hardly even speaks to me these days. I’m lucky if I get a good morning from him, much less a report on how things are going. And I went by the shop on my way here, and Tommy Lee and Ruby D. were down there—on a Sunday, mind you—arguing over shelf space.

“I know,” she said, letting out a long sigh. “You know, I’m really thinking you all are crazy and we ought to just close the shop for a while. It would ease my guilt of you all trying to make this work.”

Mack cleared this throat and nodded toward the bar door. “Guess this weather’s gonna stay cool for a while longer,” he said, doing his best to change the subject.

Sera didn’t answer. They sat together, listening to Freddy Fender sing about being there before the next teardrop falls. One of the men sang out to the chorus in Spanish.

“I’ve been thinking about heaven, Mack. I mean, there’s a side of me that wants to believe there is this garden of sunshine up there waiting for me with all the people I’ve ever lost in the world sitting around sipping lemonade in the shade. The weather would never get hot, and there’d be cats everywhere and my mother and Otis Redding and Patsy Cline would all be singing every night at a little dive. But something tells me it isn’t that simple.”

“Yeah, but what if we’re living in heaven right now? I mean, what if we’ve got it all wrong, and we’re already there.”

“I guess there’d be some people going around missing out on the lemonade.”

Sera smiled. “Maybe we ought to switch the lemonade to Shiner Bock.” She clicked her bottle against Mack’s.

In the back, Antonio turned the key on the jukebox and punched in new codes to start the music up again.

An old Johnny Rodriguez song dropped into play, a melody about being down on the Rio Grande, lovers walking hand in hand. Sera hummed, and Mack watched the beer swirl against the glass as he moved his bottle in circles with his wrist.

“Do you realize we’ve never danced together?” Sera turned to face him.

Mack smiled slightly, concentrating on his beer. “Guess there was never a time, what with me on stage and all.”

Sera waited for a moment. “What about now?”

He looked at her—this woman with eyes that danced no matter what the music, with a face that could weaken any man, with a spirit that spread around her like a magician’s stardust.

He blushed, then stood up and offered his hand. She grinned and he grinned and the old men in the corner grinned. Even Antonio looked up from his calculator—and slowly grinned.

Together, Mack and Sera swayed and moved in a slow two-step around the center of the hardwood floor. Daylight streamed in around them like nature’s spotlight. Mack held her loosely at first, but Sera moved as close to him as she could, her left hand at the nape of his neck, her right in his leading hand.

He heard her breathe in, but was not aware that she was actually trying to hold on to his scent—an earthy combination—part leather, part cotton. Part hay, part rope. Part beer, part coffee. Part horse mane and part crushed wild weeds.

As she rested her head on his shoulder, Mack let his own breath out slowly, for fear she’d know, finally, full well, the effect she had on him. Her hair, blown in many directions from the wind when she came in, tickled his nose. But he couldn’t brush it away, didn’t ever want to brush it away. He closed his eyes and memorized how her body moved, how somehow he was no longer leading and his body was only reacting to the sway of Sera’s hips, his boots following the sliding of Sera’s across the floor.

So … like it? Hate it? Let me know by commenting below! Thanks for reading, always.