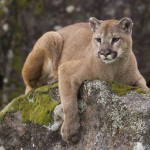 And by Big Cat, I mean THIS.

Denver Foothills people: Wow, a mountain lion. How big? Male or female? Adult or juvenile? Be sure to knock on your neighbors’ doors to tell them. Bring your dogs and children inside for two weeks. Be on the lookout and report all evidence!

Colorado Mountain people: Yep. Heard him last week on my roof at 2 a.m. Went outside, heard him hiss at me, went back to bed.

Texas people: Honey, where’s the camera and my gun?

By the way, I wrote about my own encounter with a mountain lion once for my now-defunct online mountain living column. Here’s an excerpt, for posterity.

I think I’ll always remember his stare. His black-brown eyes locked on the front end of my car and didn’t flinch. The muscles along his jaw moved, but his face and eyes did not. He didn’t glance away, not once. His ears didn’t move, either, as I thought they might. His tail was black-tipped and as long as his body, and it switched back and forth, as he seemed to be considering his options. It reminded me of how a house cat might swish his tail before pouncing on a toy mouse. I actually wondered at one point if he might lunge toward my Subaru.

His face was sharp and angular and surprisingly small compared to the rest of his body. A black line continued from his nose to his mouth, and combined with his long whiskers, he looked like he had a thin, handle-bar mustache. His stance was slightly crouched as he looked at me, his sleek body lines sloping to the back feet. He was wary of me, but there was definitely a sense that he was in control.

It seemed like five minutes or so that we stared each other down. I thought about fumbling for my camera phone, but that seemed somehow wrong. Besides, one movement on my part would have shortened our time together, I think.

Finally, with a swift decision, he leaped from the right side of the two-lane road to the left. And in one long and graceful jump, muscles rippling under his tawny fur, he disappeared into the brush and trees leading to the creek behind our home.

Afterward, as I continued along the road toward our house, I shivered a bit, literally, thinking of all the times my husband, son and I have walked that same path along the creek. Had he been there any of those times, after grabbing a drink from the water, watching us? Swishing that tail?