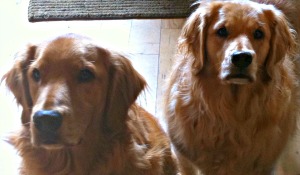 It’s true that I do not have the most well-behaved dogs on the planet. In the state. On the mountain. Okay, okay, on my street of eight or so full-time mountain people houses.

We thought they wouldn’t be.

We believed in the golden myth. That myth that plays out in every dog commercial and on every dog food bag and in every Cabela’s catalog. The myth that says, “Get a golden! They are always calm and cute … and the perfect dog to have by your side at all times.”

That myth is not just a myth. It’s a bold-faced lie, people.

Ours bark loudly when I let them out in the mornings and multiple times during the day.

They jump on visitors, and on us, when we come in the front door.

They steal socks and then shred them. (See also: Stuffed Animals) 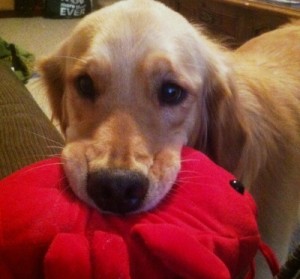 They are ace counter-surfers and have eaten, among other things, an entire, freshly baked cherry pie, a stick of butter, a loaf of bread, fresh trout, a stocking full of Christmas candy as well as the stocking, grilled hamburgers that were ready for our guests, a bouquet of tulips, and at least one filet mignon while it was actually cooking on the stove. Doggie Poison Control is on speed dial.

One of them enjoys poop appetizers before dinner. The other scratches on the back glass door when she has been put outside and needs, needs, needs to be inside. One is notoriously grumpy past 6 p.m. The other sees nothing wrong with jumping all 100-pounds of his beast-self right onto your lap while you’re watching TV, as if he’s the size of a Chihuahua and you don’t have internal organs that can be easily smushed. Both of them retrieve laundry items and books from various parts of the house and then make you chase them to get them back. They both, when relaxed, can release a smell that the U.S. military should look into for use in warfare.

Oh, and they eat their dog beds. Every one of them.

It’s no coincidence that we call them hoodlums. (And, also, for the record, I have had dogs my entire life. Lots of them. I know how to train them to behave. These dogs are untrainable.)

But here’s the thing. I’m not going to apologize for them any longer. Why? Because they make me laugh. They make me happy. They make good, fluffy, hilarious pillows. 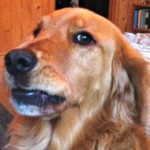 And I know that they have a reason for every bad thing they do.

When they bark, it’s because there is moose scent everywhere and a squirrel is usually taunting them from a tall pine tree above. They are programmed to tell us that these very acute dangers are present at all times. Who else is going to sound the alarm, really?

When they jump, it’s because they simply cannot contain their excitement that there are People Available. Right Now. To love. It’s so completely and totally unbelievable to have such good luck!

When they steal socks and shred them, it’s because they think it’s their job to do this. And they want to be good at their jobs. They’re overachievers, when you think about it.

When they grab food off the counter, it’s because it smells soooo good. As I tell my husband: Could you resist the world’s most awesome, decadent chocolate cake with homemade whipped icing just sitting there, inviting you to take a bite? Because every single ounce of food, I’m convinced, seems like the most wonderful thick, juicy T-bone steak to these pups. It’s kind of like how I would never, ever be able to refuse a perfectly ice-cold, fizzy Dr Pepper on a hot summer day.

They pull us on walks because they are confined to a backyard and a small home most of the day, every day. And confinement isn’t a great idea when you have more energy than a toddler on a six-pack of Red Bull. And they are dogs. They are meant to run free. To smell all of those smells. To check out every rock and tree, just in case something needs to be addressed. I understand that, I do. Some might say I’ve been known to pull those around me along for miles, too, when I get an idea in my head.

You see, as naughty as they are, I get these dogs. They march to their own beat. They won’t be tamed.

Of course, they can learn manners, like sit, but who really wants to be told what to do unless there is a bacon treat involved? I don’t.

And another thing. These furballs truly love — like with all their little hoodlum hearts — their people. I feel that way about my people, too.

They are Explorers. Clowns. Always-looking-for-trouble hounds. Cold-winter-night foot warmers with a zest for life.

So, I’m thinking maybe we could all learn a little something from my hoodlums. Sure, good behavior is nice and all. And they will likely be the best dogs ever when they are 15 years old and content to lie in the sun all day.

But isn’t there also something to be said for saying no to arbitrary rules?

Isn’t there something to be said for living exactly the kind of life you were meant to live? For doing things that make you happy every single day?

Life doesn’t guarantee you hours of great belly rubs and weeks of adventure in a mountain forest. You gotta seize that shit for yourself.