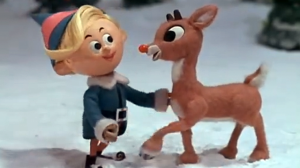 When the holidays roll around, our family usually sets aside time to watch the old favorite, Rudolph the Red-Nosed Reindeer. And this year was its 50th anniversary, so, yeah, it was on the DVR. And we were ready with fresh-baked cookies and popcorn, the Christmas tree lights on, and a roaring fire in the woodstove. As traditional as it gets.

Unfortunately, this mama was stressed the hell out that night. Life hadn’t been easy that week. So I had, shall we say, a couple of glasses of wine prior to Rudolph. Yes, let’s go with a couple.

And as it turns out, a wine buzz and 1964 claymation do not a good combination make.

In a mere 40 minutes, it seems I pointed out everything that’s completely wrong about the show. As in pausing it and rewinding and pausing and pointing it out again and again. And laughing hysterically.

Yep, I have pretty much ruined the show for my kid and all future generations of his kids.

But at least he was laughing along with me. He even took pictures of the screen.

Here are a few of the highlights of our analysis.

Secondly, Santa is a serious asshat throughout the whole movie. He doesn’t like the song the elves sing for him. He tells Donner he should be ashamed of Rudolph and his nose. He’s a total steaming pile of turd to Mrs. Claus. And he looks like he’s been on the Paleo diet during most of the movie. 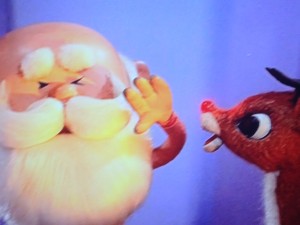 Furthermore, if you look closely, Santa only has three fingers and a thumb. No lie. Where is the other finger? Did he use it during a period of road rage when sky traffic got bad one night? And then did he get into a bar fight where someone taught him a lesson? It could happen. I bet a lot of guys who dress up like Santa and go to bars get beat up.

Yukon Cornelius, who was my first boyfriend really, turns out to be a problem. You see, this is a kids’ movie, right? Even in the 1960s, he really shouldn’t have been packing visible heat in a children’s holiday special. But yep, right there in his holster is a big ol’ shiny gun. The Moms Demand Action and gun violence activist in me was quite disturbed by this. He had a gun. A gun not used for hunting. In a children’s Christmas program. And we wonder what’s wrong with the world.

My testosterone-laden family members, however, were more concerned about the fact that he had a gun with him and yet never tried to use it to defend himself and his friends from the Abominable Snowman monster dude.

Also, he had a flask. And I’m pretty sure he didn’t have apple juice in there. 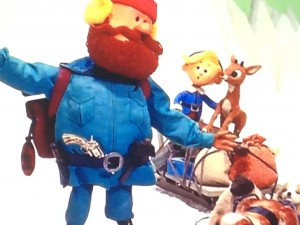 Yukon’s team of dogs also poses an issue. Early on, he has them and is mushing them and all, while being chased by the Abominable Snowman monster. But then all of a sudden, Yukon, Rudolph and Hermie are on an iceberg floating away from the monster. And no dogs. They were obviously left behind at a kill-shelter or they were eaten by the monster. I cried a little. But then they suddenly reappeared later. Where were they during the adventure on the Island of Misfit Toys? Did someone give them food and water? Also, amidst the Saint Bernards and Huskies, one of the dogs is a bona fide Poodle. 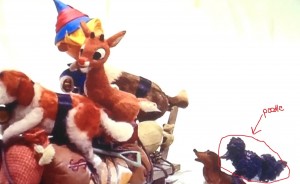 Hermie may or may not be gay. Which is absolutely fine. Love who you love! But did they use “dentist” as a code word for “gay” back in the 60s? I need to look that up.

Also, Bostonians take a hit in this move. Because one of the mean-ass little bastard reindeers who is so clearly bullying poor Rudolph had a distinct Boston accent. Was that necessary? I guess I should be grateful they didn’t make him a Texan. Although now that I think about it, Hermie had a bit of a drawl.

Sexism was alive and well in the special, too. Donner has a name but his wife doesn’t. She’s only Mrs. Donner. And when Donner, Mrs. Donner and Clarice are out looking for Rudolph and can’t find him, Donner decides the best thing to do at that point is to “just get the women home.” Oh yeah, Donner? Like we’re so frail and useless? Well, I hope Mrs. Donner burned her bra in 1972 and found fame and fortune (without you) at Disneyland where she currently surfs the waves, reads Chaucer on the beach, owns a high-rise luxury condo, and goes out at night with J-Lo and a number of nice bucks who know how to treat a lady. And I hope you waste away alone in that little cave of yours or that Yukon mistakes you for supper. (Too harsh?)

I also have a little bit of a problem with the way the Abominable Snowman was tricked into coming out of his cave, with Hermie pretending to be a pig and “oinking” to get his attention. Yukon says if there is something any snowmonster can’t turn down, it’s a fresh side of pork. But I’m pretty sure there are no pigs, domesticated or wild, in the North Pole region. I googled it.

I’m just saying that I could handle the whole reindeer born with a glowing nose and an island of misfit toys and a flying sleigh better if there had been some fact-checking going on in other areas of the plot.

Finally, the movie ends with Santa flying off into the sky with his reindeer pulling his sleigh and Rudolph leading the way. It’s a touching scene, really. Until you realize that the sky is beautifully clear without a cloud in sight. So that kind of blows the whole a-blizzard-is-the-reason-why-Rudolph-was-needed story climax. That’s just lazy writing, people. 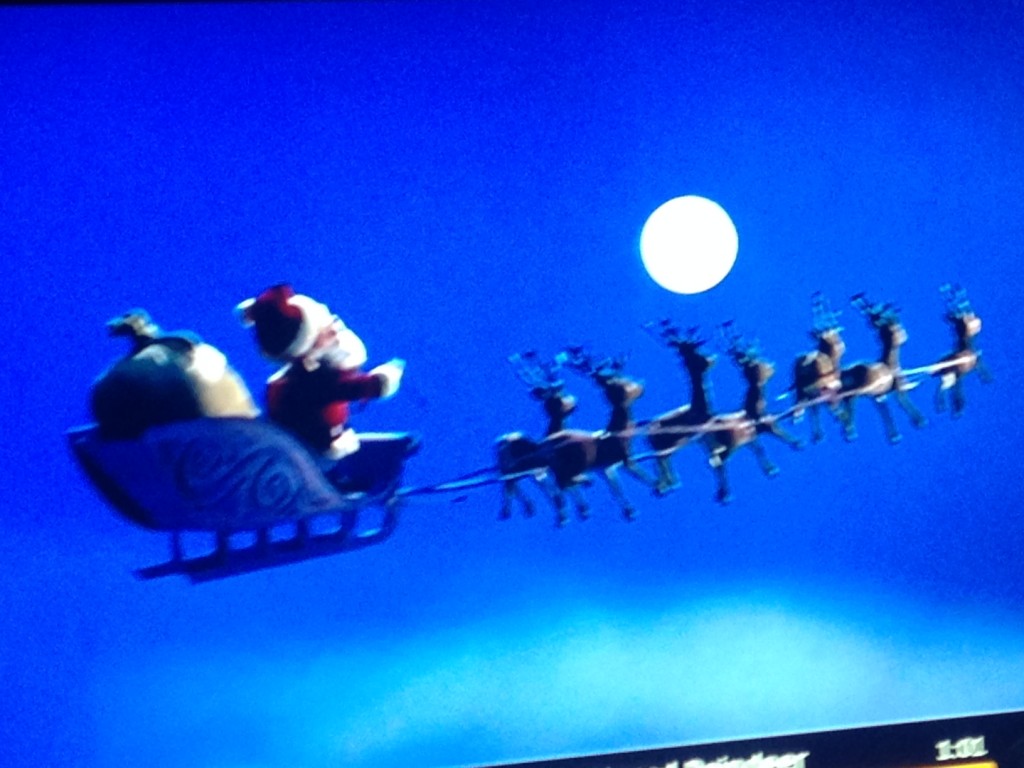 Next up, look out Charlie Brown.

5 thoughts on “Rudolph the Red-Nosed Reindeer Is Forever Ruined”