Every now and then on this blog, I’ll share something I’ve written previously that I think my readers might find of interest.

Today, I’m pleased to present an edited version of an essay that originally appeared in the book, Going Green: True Tales from Gleaners, Scavengers, and Dumpster Divers (edited by Laura Pritchett, University of Oklahoma Press, April 2009). 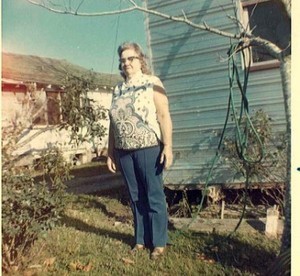 I thought it was fitting to post this, as it honors my grandmother, Edith Harris, and her birthday was this month. I still miss her so much. (Side note: She was known by most people in town as simply, “Pete.” Her dad had wanted a boy, so he gave her that nickname in childhood and it stuck. She was a helluva tomboy, too.)

My grandmother on my father’s side would have rather slept with the Devil than join forces with any kind of hippie-based, peace-love-back-to-earth movement.

Let’s just say Granny was quite the tough Texas ranch woman. A 5-foot-tall force to be reckoned with. A woman who could stare down a 900-pound Brahma bull in a pen the size of her kitchen in the morning, then fix collard greens and cornbread, still wearing her rubber farm boots, in the afternoon.

She was also a woman who, unlike me, didn’t spend a great deal of time worrying about the future of our country’s landfills, reading the current research on greenhouse gases, or considering whether or not a Sonic Drive-In “to-go” cup was in any way biodegradable (it’s not). Yet my grandmother remains the one person who taught me the most about conservation and reuse.

One of my first lessons in reuse from Granny involved a rather hot summer afternoon—and a wooden popsicle stick still wet with purple stains. I remember aiming that stick at the trash can, intent on tossing it away quickly before those evil South Texas fire ants covered it, and my hand, in their fiery red stings. That’s when my grandmother promptly yanked the stick from my hand with her own calloused one, and gave me a look that would’ve made a preacher feel guilty.

“What?” I asked, hand on hip and with a bit more sass than I could usually get away with around my grandmother. I was feeling brave.

She didn’t answer me, just faced me with a raised eyebrow and a tightly drawn mouth. I knew that face—and that face was never a particularly good sign. She proceeded to guide me not-so-gently by the elbow to the kitchen sink, where she stood behind my shoulder, forcing me to wash that one stick with green Palmolive soap until every trace of stickiness was gone. Then she took it from me, dried it with a kitchen towel and dropped it into a brown paper grocery sack that held at least 50 other sticks just like mine.

Two months later, Granny had me working alongside her in the garden, labeling new fall plants with popsicle-stick garden stakes.

Today, as I look around my little log cabin located here in the mountains of Colorado, the floor is covered with piles of things I’ve collected with hopes of recycling … items I’ll eventually take down to Denver on a once-a-month recycling drop. The number of aluminum and steel cans alone makes me cringe. Just two weeks’ worth takes up far too much space and tells me just how often we Americans use containers like these only once and then chuck them without another thought.

I doubt my grandmother ever even heard of a recycling center in her rural area. But she certainly had her own recycling program: She made sure just about everything she acquired had a second, third or forever use. (The most impressive of which, by the way, was to cut aluminum beer cans into pieces and stitch them together with crochet yarn to make funny little hats. I have pictures to prove this.)

I remember Granny would buy those generic-brand 2-liter bottles of soda to have on hand for us kids. Inevitably we’d find those empty plastic bottles all over her house and yard, used in a multitude of creative manners—cut in half and used to protect young plants in her garden, made into a weird kind of shower caddy for the bathroom, or sitting beside her favorite chair in the living room, keeping her crochet yarn from tangling as she worked on her next project.

Where there wasn’t plastic being reused, there was glass. Used bottles and jars of all kinds lined the garage utility shelves—themselves old 2 x 4 slats of wood from some torn-down shed. The jars were stacked neatly and arranged by size, to later use as flower vases and incubators for cuttings of ivy and other plants. Or as containers to hold nails. And those little round margarine containers? They soon became “I Can’t Believe It’s Not Tupperware” in her refrigerator, their contents labeled over and over again in black marker.

When clothes didn’t fit anymore or were so worn they had holes in them, she’d remove the buttons or snaps and cut the fabric into cleaning rags and dish towels.

We often ate lunch with Granny after working cattle, and it was usually a quick sandwich on white bread. Even then we all understood to save those plastic bread bags and the plastic-covered wire bread ties. To this day, I’m not sure how she used those wire bread ties, but there must have been hundreds tucked around the house.

My grandmother has been gone for several years now. But her beliefs in gleaning all we can from all we encounter are alive and well, if only in my own attempts to salvage and recycle even the smallest of items. I wash and reuse pieces of foil and those pint-sized plastic food storage bags. I have far more than my share of sour cream containers stacked in my kitchen cabinets. I drive my husband crazy storing junk-mail paper that I use as notepads. I even save those little wire bread ties, though I still don’t know why and have yet to actually reuse one.

I’m well aware, of course, that my grandmother didn’t take on her philosophy of frugality and reuse because of any high-falutin’ idea of saving the earth for future generations. She learned that way of life from her parents and grandparents, from years of finding it difficult to put money in the bank, and from the only lifestyle she ever knew—farming and ranching.

But I also believe that somewhere beneath my grandmother’s no-nonsense side, there was a soft and unspoken, perhaps even whimsical, respect that guided her choices — a respect for not only the land and its role in her daily life, but also for the people who provided and packaged the items she couldn’t grow or make herself. Because she made so much by hand, and labored long hours to manage and generate livestock and produce, she understood that every item, every person, every blade of grass, every drop of rain, had value. And it was only right to honor that.

In short, you don’t throw away a perfectly good popsicle stick just because the icy grape treat is gone.

5 thoughts on “Ode to My Granny: The Queen of Green”