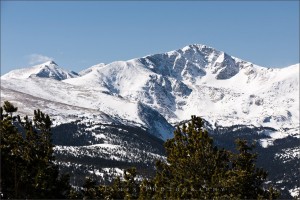 It’s been over a year now since we moved from our cozy log cabin, located at the top of a mountain in the Colorado Rockies, at 10,500 ft. above sea level, down to a mere 6,800 ft. in the foothills southwest of Denver.

This was supposed to be a one-year experiment with living without the dangerous driving conditions, the 5-ft. snowstorms, the year-round shoveling, the need for professional gear to take a walk around the neighborhood in February. It was intended to be a glimpse into things most people take for granted, things like a garage, trash service, newspaper delivery, a grocery store and gas station nearby, the certainty of running water and electricity. (Read about the move here.)

And it appeared to be the perfect compromise: Still living in a log-cabin-ish house, in a pine forest, with views of the Continental Divide if you squint to the west from our deck.

For a normal person maybe.

For me, it’s been hell. I mean, don’t get me wrong … it’s an easy hell. A pretty comfortable hell. (Turns out, it’s no big deal to run out of toilet tissue down here. And the snow — get this — melts after a storm!) And my garden was lush and productive this year, unlike even our year we had a greenhouse up on the mountain, before the bear tore it down.

And yet, I’ve been in mourning.

It’s hard to put it into words, sometimes. Because it’s more than the hiking trails that were out my door, and the snow and the mountain view and the high-summer days that hit 75 at their warmest. (Did y’all know it gets damn hot down here in July? Especially with no air conditioning in a house?)

I miss the solitude and seclusion of my mountain. I miss neighbors that keep their distance and don’t freak about a dog that barks at herds of deer on occasion. (I’m particularly bitter about that one. See previous post. Animal Control and several certain people who live near here with their panties in a perpetual wad can kiss my aspens!)

Oh yeah. I miss the sound of aspen leaves shaking in the wind before they fall. And the silence. I miss that you can lie awake at night up there and not hear anything but your own breathing and maybe the stars moving up above. I miss how the raw world up there influenced my writing in ways foothills living just doesn’t do.

I miss the challenges of seemingly easy things, like getting to your front door in January after being gone all day and oh by the way there’s now 3 feet of snow there.

I miss how life at 10,500 ft. pushed me, every day, in new ways. I miss how alive that fresh, thin air up there makes me feel. I miss the creek and the lakes — they felt like ours alone. I miss evening walks when you didn’t have to worry about cars hitting you (only mountain lions out for dinner. And I can deal with mountain lions better than humans, most days.)

I even miss the nights when the electricity was out and it got so cold that we had to sleep in the great room by the woodstove, to make sure it kept burning all night so the pipes wouldn’t freeze.

If it were up to just me, we’d be back up on the mountain right now, enjoying the beginning of winter. But it’s not up to just me anymore. My husband likes it down here. My son misses the mountain, but he’s found a little tribe of friends down here at this neighborhood school, and his smiles are priceless. The commute to my new job from the old house would be painful. And let’s face it, moving is expensive.

So we’re staying through next summer at least. In the meantime, I have writer’s block when it comes to fiction writing, and the liquor store is only a few minutes away. Is this how Hemingway became an alcoholic?