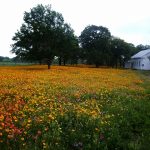 The wildflowers were incredible!

Several things are more clear to me than ever after my whirlwind book tour in South/Central Texas: I have some of the best family and friends in the world back home; there are few sights more beautiful than a lush green pasture full of Texas wildflowers and grazing horses; and my skin and hair still visibly balk at a week spent in that 200-percent humidity.

My five-year-old son accompanied me on the book tour, and we had a great time. (My son was either selling or giving away his autograph and asking others for theirs at several of the events. He was way more popular than me. It’s hell to be overshadowed by a cute kid.)

Various members of my family (my mom, my sisters, my niece, my dad) served as my promoters, bankers and greeters. It was so nice to feel supported by them (and I think they were even a little proud of me!) Along with several friends who pounded the pavement for me to bring people in for the events, I felt like I had my very own little Street Team going on. 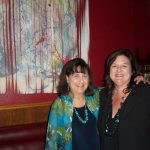 At the Bryan, Texas, book signing with friend Lori C.

I got to see so many dear friends from my previous lives … high school friends, college running buddies, coworkers from the jobs I held at Texas A&M. I got to catch up with wonderful people over wine and beer and burgers. I got to thank many of my hometown teachers who taught me so well all those years ago.

Other stuff that happened:

At one of the events, people took books and had me sign them without paying for them … I think they thought they were free for the taking! When I told a friend this at another event, he suggested he had attended the wrong party (since he’d had to pay for his copy that night).

My sister’s hubcaps were stolen off her Cadillac during one of the signings. This was only a little bit funny to her. (Or not at all now that I think about it.)

I spoke to a group of high school seniors at my alma mater in Gonzales, and the vacant stares and large yawns were a bit unnerving. I tried to make jokes here and there, but this tough crowd was having none of it. However, no spitballs were thrown at me, and I considered this a positive thing. Note to self: Do not go into motivational speaking to young people.

I had intended to ask someone to take pictures at the events, but kept forgetting to actually alert anyone to this need until the end of each event. But this way, I can remember myself as looking better than I actually did. (If you are reading this and took pictures at an event, and — this is important — I look good in the pictures — send them to me via email – kathy@kathylynnharris.com!)

At one event, an old friend of mine came up to me dressed in a disguise. Was this really necessary? Did make me laugh, though.

Okay, I think that’s it for a recap. Thank you to every single person, in disguise or not, who attended an event in the Lone Star State. It was an amazing experience (my first book tour ever!) and I’m just so grateful.

I’m also officially exhausted and out of gas money.