* Special promotional note: I used Grammarly to grammar check this post, because proofreading my own work is for sissies. Kidding. Kinda.

* Special non-promotional note: This article first appeared in the awesome The Write Life magazine earlier this year. Reprinted here with permission. If you’re a writer, I highly recommend this cutting-edge, digital publication.

Now, on to the actual post. I wrote this in response to the question:  Why do you write? 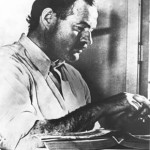 Ernest Hemingway once said that there’s nothing to writing; all you have to do is sit down at a typewriter and bleed. E.B. White was quoted as saying that writing is not only hard work, but also fairly bad for your health.

And even though Hemingway was likely drunk when he was quoted and White can’t really be trusted because of the whole talking pig thing, there is some truth to their words.

As a professional writer with 25 years of experience (obviously, I began writing in utero), I agree that writing can be a soul-wrenching thing. After all, writing means staying up until 3 a.m. to finish a chapter you’re working on, even when you have to get up at 6 a.m. for Real Life. It’s revising and revising until your corneas get angry at you. It’s putting your words out into the universe only to have one reader simply comment, “Meh,” in a one-star review on Amazon.

So why would any sane person do it? Why do we writers continue to put pen to paper and fingers to keyboard when we could be watching Downtown Abbey or Duck Dynasty instead?

For some of my writer friends, the need to write is like the need to breathe air. Others say they write mostly because they love to tell a good story, and the world needs more good stories.

Me? Well, I think it comes down to three factors.

1)  I write because it’s not socially acceptable for me to play with Barbie dolls anymore. Even though I was a tomboy in every other way possible growing up in a ranching family in South Texas — with the scars to prove it — there was one “girly” thing I loved. And while the feminist in me today reels at the thought, here it is: I loved to play with Barbie. And Skipper and Ken. Only I renamed them Cherry, Hayley and Holden, respectively. 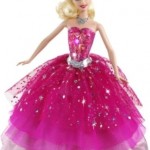 This is a headless Barbie.

That’s right. I played with plastic girls with sparkly tube-tops and unrealistic 38-18-34 measurements. But unlike a lot of Barbie fans, I didn’t care what she looked like, or what dresses she wore. I didn’t envy her twist-n-turn hips, blonde hair or blue eyes.

To me, Barbie was a mere tool for my vivid (and probably not quite normal) imagination. I put those dolls in situations no doll in the history of dolls would ever want to be in. They were probably praying every night for Mattel to come and put them out of their misery.

The stories I created were soap-opera-level in intensity. There was illicit activity going on in the broken elevator shaft in the Dream House. It wasn’t unusual for miniature furniture to be thrown in anger from the penthouse. There was a scene involving beautifully crocheted clothes (made by my unsuspecting grandmother) being torn off in passion. (Note to Mom: I watched Showtime when you weren’t looking.)

Now that I’m a grownup — or at least pretend to be one — I still have the same crazy imagination, and stories still pop into my head all the time. Only now, I pour the drama into short stories, novels and other types of writing.

I think Cherry, Hayley and Holden would be pleased.

2)  I write because I can’t afford therapy. Most writers I know aren’t necessarily rolling in the dough. Yet we tend to have varying degrees of tormented inner lives that make us great candidates for therapy. So for me, writing is a great, zero-percent-down alternative. 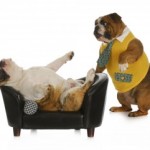 I can even face my fears — and write my way through it all until I see light at the end of tunnel, or at least until I can get it ALL OUT and move on.

Sure, I could spend months in a therapist’s office and come to all the same conclusions. But you’re not allowed to drink copious amounts of vodka at a counseling appointment, are you? Plus, writing doesn’t demand a copay.

3) I write because I want to make a difference. (Cue the We Are the World music now.) Throughout my childhood and in college, I always believed I would one day do something important that would help make the world a better place. Basically, I wanted to be a kick-ass combination of Susan B. Anthony, Mother Teresa and Ann Richards. 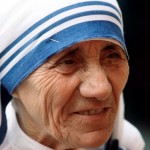 This is Mother Teresa.

After college, I took up causes. I was knee-deep in political campaigns and volunteering for activist organizations. I was working at animal shelters and marching for better elder care.

And I was frustrated.

I felt like I was scratching on a well-trodden, muddy surface, and any difference I’d made was quickly gone when the next rain hit.

Today, I still do some of those activism things. But I also understand that through the effective use of language and storytelling, I can sometimes reach readers in a pretty darn deep place — a place where thoughts and ideas linger long enough for questions to be raised, and a search for answers to begin.

In fact, when a reader tells me that my work has touched them somehow, and made them think about something a little bit longer than they would have otherwise, that’s when I know that what I’m doing with my life — this whole writing thing — does matter.

After all, books and stories and poems have been known to change lives, you know. And if my work can trigger just one little change in just one person, then, well, it’s worth it.

* The following words are registered trademarks: Amazon, Downtown Abbey, Duck Dynasty, Barbie, Mattel, Showtime, and probably some others I’m failing to mention. Please don’t sue me. Refer to #2 above.

13 thoughts on “Hemingway. Barbie. Therapy. Mother Teresa. You Know You Want to Read This.”