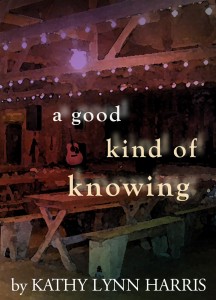 “…a book I will never forget.”

Imagine if Maeve Binchy grew up in Texas and wrote an old-school Larry McMurtry novel. Think Hope Floats meets High Fidelity. That’s how critics have described A Good Kind of Knowing … a novel about the power of music and friendship, the relationship two-steps that go on in old Texas dancehalls, and the secret to finding just a little bit of common ground in a world full of distrust.

” … When you get to the end, you don’t just want to see what happens. You actually care.”

Sera Taylor’s store is the one place in Lakeville, Texas, where individuals from all walks of life share a universal love for music and a respect for the gypsy-like woman behind the antique glass counter. Readers get a taste of the unorthodox connection between Sera and Mack, a young local cowboy and musician, and Sera’s previously untested devotion to her husband Bill. They learn of her relationship with Ruby D., the vibrant but misguided mother of five; with Louie, the shy high school band director; with Beverly, the religious, upper-class socialite; with Antonio, a local bar owner striving to make a life for himself; with Tommy Lee, a rich and directionless gigolo; and with Wes, the only out-of-the closet gay man for miles. As Sera battles a serious illness, the characters must overcome long-held stereotypes to save Sera’s store, and in the end, large parts of themselves.

“These are people you will like getting to know. Put on some good music, and open this one up.”

AVAILABLE IN TRADE PAPERBACK AND EBOOK
Amazon                 BN.com/Nook
And indie bookstores near you!
First edition published in 2013 by