A recent article in the Austin American-Statesman by Brenda Bell, titled “Is the Texas twang history?, questions how much longer the well-known Texas accent will survive.

The article notes that more and more young Texans, in metropolitan areas especially, no longer seem to “have” it. Or if they do have it at all, they only use it strategically to fit in or distinguish themselves, sometimes subconsciously.

Well, y’all. This flat-out disappoints me. I myself love the sound of a Texas accent, as I mentioned in a previous blog post. And I love my own accent. Even in my younger years, when I was trying to make a name for myself professionally, trying to be taken seriously in places like New York and San Francisco, I never tried to hide my accent. (Which is probably a good thing as some might argue that would have involved me actually keeping my mouth shut.)

In fact, I am damn proud of my accent and thought, after reading that article, I would think about all the reasons I enjoy having it around:

1. I stand out at Colorado mountain parties. The idea that there are a ton of Texans who live in the mountains isn’t true in my neck of the forest. I’m usually the only one. Which often leads me to defending my home state because it seems there have been some bad apples who try to ski the black runs after drinking a case of beer. Also, there’s that whole George W. Bush thing I have to explain.

2. I don’t get mistaken for any of my colleagues on conference calls with clients. When I talk, clients from afar know it’s me. For better or worse. Not that some of my coworkers don’t attempt my accent, some out of complete harassment I might add, but none have achieved believable status.

3. It’s easier to meet other Texans. If you’re at a bar having a conversation with a group of people, and another Texan is around, I don’t have to wave my Texas freak flag because they already have honed in on me as one of their kind. (I should note here that I can’t really remember the last time I was in a bar due to the fact that I have a crazy-busy life and a 5-year-old who is attached to me at the hip.)

4. My husband likes it. Granted, he likes it better when it’s not filled with a litany of cuss words aimed at him, but still. He grew up as an Air Force brat, living all over the place, so he doesn’t have an accent of any kind. Poor guy. I do pity him. 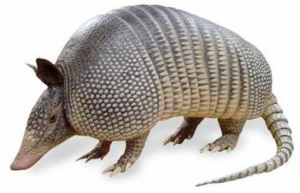 This is an armadillo.

5. I like the way people stare blankly into space when they can’t understand me but are too embarrassed to ask me to repeat myself. I also like just as much the long pause, then the, “Uh. What?” I then respond by translating. Really, when you think about it, I’m like an ambassador for the armadillo state. (Side note: Speaking of armadillos, my granny crocheted me one out of pink yarn when I was a kid. True story. I still have it.)

Seriously, my accent is important to me. It’s part of who I am, a marker of where I come from — of the region, the food, the weather, the land, the people. Frankly, I’m disconnected from my family and friends back home in so many other ways, there’s no way I’m giving up this one.

That’s why, right here and now, I vow to never use my Texas twang strategically like those young city kids of today are doing. (Except for maybe if it could get me out of jail. Or a free bottle of vodka. Or if I really needed some BBQ and fried okra and I didn’t have any money and ..)

If nothing else, I’m glad to be handing down my accent to my son, who has been born and raised in Colorado. We’ll see if he shares the love of twang when he’s 18 and being bullied by some guy from New Jersey.

4 thoughts on “Five Reasons I’ll Keep My Texas Twang, Thank You Very Much”