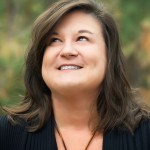 Kathy Lynn Harris was lucky enough to grow up in a ranching family in rural South Texas — surrounded by flat, dry land; mesquite trees; Larry McMurty books; and colorful, real-life characters who knew how to work hard, get their hands dirty, and drink straight whiskey on Saturday night.

She’s eaten fried rattlesnake, braised squirrel, and just about every part of a cow that’s edible, except the testicles. (A girl must have standards.) She attempted vegetarianism for two weeks in 1999, her spirit eventually broken by her dad’s barbecue sausage and her mom’s world-famous chicken-fried steak.

More than 20 years ago now, Kathy packed up her boots and left Texas to make the move to Colorado—to live out her dream of being a kick-ass, back-to-nature pioneer woman. Which sounds like she doesn’t shave her legs. But she totally does. Most of the time.

She bought a log cabin at the top of a mountain, at an elevation of 10,500 ft. above sea level, where electricity and running water were not givens, and it snowed 10 months out of the year. But the trout were plentiful. The Continental Divide was right there. The stars were so close you could almost touch them. And the closest (and nicest) neighbors were foxes, mountain lions and bears.

Now, due to an ongoing battle with Long COVID, Kathy moved to the beautiful, oxygen-filled air of Charleston, South Carolina. Alligators live in her backyard pond (this is a negative), but she’s only 20 minutes from the ocean (this is a positive).

Kathy is the author of two Amazon bestselling novels, one of which won a national literary award in 2013. She’s also written children’s books, magazine articles, a nationally recognized online column on mountain living, short stories, essays and award-winning poetry. Her work has appeared in numerous published anthologies, as well.

Ice-cold Dr Pepper, good manners, and Texas A&M football are still part of her religion. According to Buzzfeed: Her celebrity lookalikes are Sandra Bullock and Catherine Zeta-Jones (in the curvy years). If she were a dog she’d be a pit bull.

Her greatest accomplishment to date is raising the world’s smartest and kindest young man who can out-fish pretty much anyone.

Be sure to check out Kathy’s blog, You can take the girl out of Texas, but …, where she writes about anything she damn well pleases.